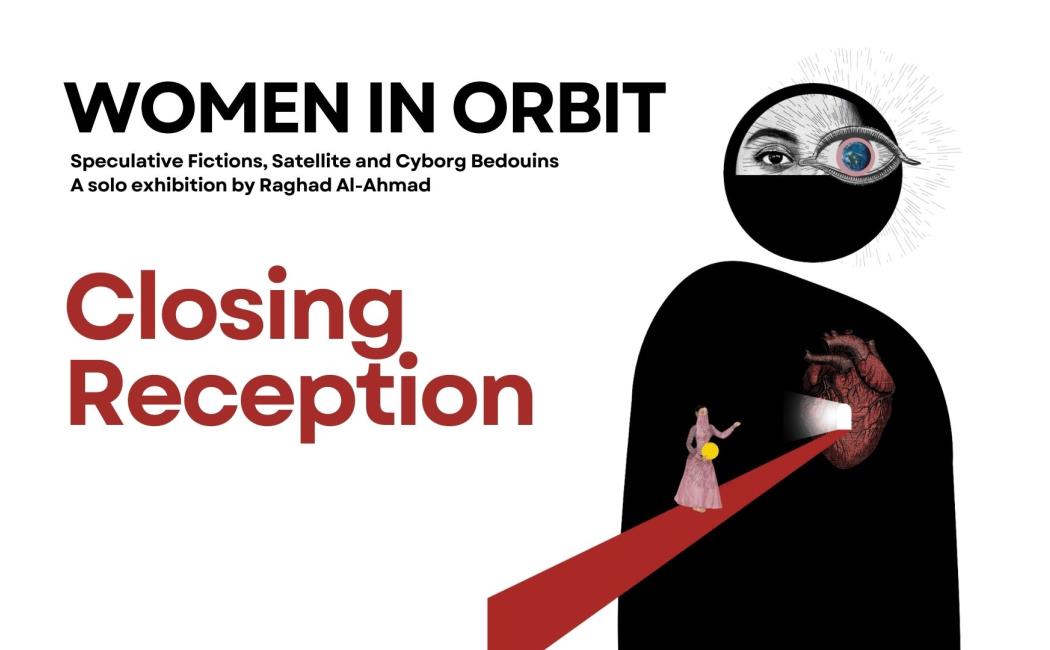 Meet the artist | The Office of the Arts hosts a closing reception for Raghad Al-Ahmad: WOMEN IN ORBIT – Speculative Fictions, Satellite and Cyborg Bedouins

Following three successful months of exhibition, including multiple curator-led tours, workshops and school visits for 200+ TKS students, join us for a closing reception with remarks and a Q&A with the artist, Raghad Al-Ahmad.

In conjunction with WISER (the KAUST Workshop for Women in Science, Engineering, and Research) the Office of the Arts unveiled a solo exhibition by Saudi multimedia artist, Raghad Al-Ahmad. In her exhibition at KAUST, Al-Ahmad enlists us in a radical act of imagination. Speculative fictions, personal mythologies, satellites, cyborg Bedouins and other STEMinism are meshed in an emerging voice rich in its ability to be allegorical, but also and, paradoxically, playful, and poignant.

Aesthetically, the artist’s multidisciplinary practice revolves around collage, surrealism, Islamic miniature paintings and art installations, which are influenced by movements such as the Bauhaus, Memphis Milano, and Islamic schools of design and architecture.

For Al-Ahmad, art is a medium through which she transforms her reality, while, at the same time, documenting it, showcasing its cultural roots, and its link to her identity and gender.

Encompassing work on paper, sculpture and video, the exhibition harnesses the power of myth and the extraterritorial in a manner that infiltrates mental borders and exalts fiction – from the Latin root source, fictiō (the action of “fashioning”, “shaping”).

For all the women in orbit, in Al-Ahmad’s exhibition, are engaged in the construction of alternative states of becoming and reflecting, which has at stake the right to self-definition.

Born and raised in Jeddah, KSA, Raghad Al-Ahmad is an experimental artist who uses multiple mediums such as collage, installation, sculpture, and digital films.

Recently she was invited to collaborate with luxury French house and fashion designer Jean-Paul Gaulthier.

About the Office of the Arts

Under the umbrella of The Office of the Provost, the Office of the Arts consists of a visual and performing arts team with a mission to promote art, science and culture in KAUST, the Kingdom, and in the wider global context.