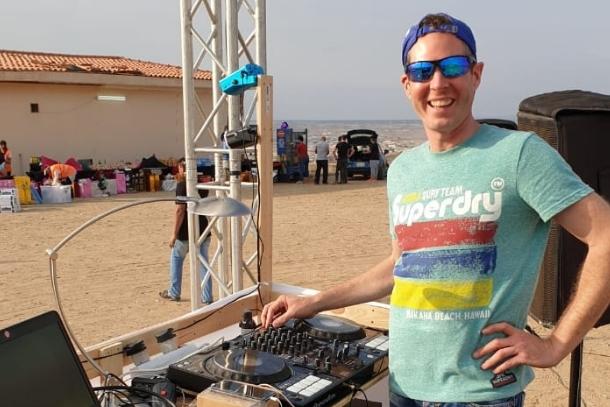 Ralph Timmermeester is known as the “KAUST DJ.” His music and laser shows light up community events and put us in a party mood. Ralph has been DJing since he was just 11 years-old and, after he acquired and built his own DJ equipment (loudspeakers, lightning console, etc.), he then started playing at birthdays, weddings, and company events as a mobile DJ. Now, Ralph leads the Community Club “Ministry of Discjockeys” with a team of 12 DJs. If you know Ralph you know that his enthusiasm does not have a dimmer switch; this man enjoys life to the max. Ordinary is not good enough for Ralph. He always wants to rock the house and deliver an unforgettable experience.

Apart from DJing, Ralph is also an expert in laser technology (no surprise). During the day he works in the Core Labs’ Lab Equipment Maintenance (LEM) department, leading 5 specialists in the Physical Technologies Unit. His love of the beautiful beams began when he first saw laser shows in discotheques. It was later that he became interested in the industrial and scientific application of lasers. After acquiring a diploma and Master's degree in laser technology from Steinfurt and Jena universities, Ralph worked for 14 years as a laser service engineer travelling around the world installing and repairing scientific lasers. It was when Ralph arrived in KAUST his passion for music and light shows was reignited.

Ralph comes from a small town close to the city of Münster in Germany but has also lived in San Francisco, Maui, Hawaii, and Jena, Germany before arriving at KAUST in November, 2018. He had previously visited KAUST several times as a laser field service engineer before being asked to join the LEM team for which Ralph has helped to organize various training seminars, laser technology trainings, and the “Total Customer Focus” program.

As a service engineer, Ralph repairs equipment at work. But his work does not stop at 5 o’clock. He has created his own home workshop to manufacture gadgets and repair things that people from the KAUST community bring to him, such as bikes, electrical instruments, diving gear etc. Creativity, utility, and safety are his priorities. But Ralph’s life is not all high-energy - being a single guy, he can indulge himself on his days off. When his power level is low he likes to enjoy KAUST’s leisure facilities, “Relaxing at the IRC pool or South Beach reminds me of being on holiday at a beach resort rather than a university campus.”

Ralph is proud of the positive contribution his DJ team makes to the community. Their events impact the community’s wellbeing, help new people to integrate into the community, and nurture new musical talent. He is also proud to be a KAUSTian and tries to live within its values. He strives for openness, positivity, flexibility, and passion in whatever he does. KAUST inspires him to transform brilliant ideas into innovative real-world products.

“In my opinion, KAUST is the place where you can enable and achieve your own vision easier than anywhere else in the world. You just have to be passionate and enthusiastic about it and make it flow from the bottom of your heart into the world.”

Find out more about KAUST’s Ministry of DJ here

If you know someone who is a beacon of our community, we want to hear about them! Fill in the People of KAUST form to share their story for consideration.